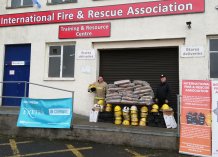 Firefighters on one of the Galapagos Islands will wear UK fire brigade kit thanks to a surprising series of events sparked by a University of Exeter student.

Marie Nute, a mature student studying animal behaviour at Exeter’s Penryn Campus in Cornwall, is due to visit the island of San Cristobal on a university field course in January.

On hearing reports from a previous trip that San Cristobal’s firefighters worked in jeans and T-shirts, Miss Nute contacted a friend at London Fire Brigade, who in turn contacted the International Fire and Rescue Association (IFRA), a charity that helps equip firefighters worldwide.

Now 26 sets of former Scottish Fire and Rescue Service protective clothing are set to be shipped to Galapagos.

“I was lucky enough to be selected for the Galapagos trip and in our introduction meeting we were asked to consider giving something back to the islands,” Miss Nute said.

“We were told the fire crew there had very little equipment.

“I have a good friend who works for the fire brigade and I thought she may be able to help me source some small items of equipment that I could carry over with me.”

Miss Nute’s friend Patricia Hadfield, a firefighter in Tooting, said: “I contacted a friend of mine, David Kay OBE who runs IFRA, and the rest is history.

“We see our firefighting colleagues as our extended family and we are so happy to be able to help.”

Mr Kay, IFRA’s director and chairman, immediately took up the challenge and – communicating via Miss Nute – asked the San Cristobal firefighters what they needed.

The equipment now set to be shipped is 26 helmets, tunics, flash hoods and pairs of gloves, trousers and boots.

“Firefighters in any country deserve the same level of protection if they are expected to run into burning buildings,” Mr Kay said.

“This is equipment we can’t use in the UK anymore because regulations here have changed, but it’s still high-quality and in good condition.

“We are very glad to be working with the University of Exeter to help our brother and sister firefighters on San Cristobal.”

The initial plan was for Exeter students travelling to Galapagos in January to take the kit with them as hold luggage.

But with each set weighing 18kg that was impractical, so IFRA offered to pay for shipping.

And this shipment may not be the last.

Miss Nute said: “After our visit in January, we may be able to fundraise to send a crate with breathing apparatus, pumps and other larger equipment.

“This certainly could be a long-term project between the IFRA, the University of Exeter and the people of San Cristobal.

“We are happy that the fire crew on San Cristobal will soon be able to fight fires with the proper equipment, protecting both the people and the environment.”

Carlos Gonzales, chief of the fire department for Galapagos and San Cristobal, thanked those involved in the equipment donation.

“This action will improve our response in case of an incident or emergency in our community or our fragile ecosystem,” he said.

“We are grateful for this gesture of kindness towards us.”

“One of the tricky things as a scientist is that you go to other people’s countries but you’re not necessarily there to help them,” Professor Russell said.

“This can give rise to conflict between locals and scientists.

“To go to this island and kit out their entire fire brigade shows how scientists and communities can work together for the collective good.”