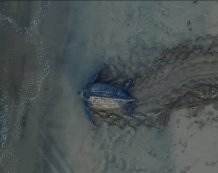 Drones are changing the face of turtle research and conservation, a new study shows.

By providing new ways to track turtles over large areas and in hard-to-reach locations, the drones have quickly become a key resource for scientists.

The research, led by the University of Exeter, also says stunning drone footage can boost public interest and involvement in turtle conservation.

“Drones are increasingly being used to gather data in greater detail and across wider areas than ever before,” said Dr Alan Rees, of the Centre for Ecology and Conservation on the University of Exeter’s Penryn Campus in Cornwall.

“We are learning more about their behaviour and movements at sea, and drones also give us new avenues for anti-poaching efforts.”

The paper warns that, despite the benefits, drones cannot fully replace ground work and surveys.

And it says more research is required to understand if and how turtles perceive drones during flight, and whether this has an impact on them.

The paper, published in the journal Endangered Species Research, is entitled: “The potential of unmanned aerial systems for sea turtle research and conservation: a review and future directions.”