The skeleton of a huge seal that washed up on a Cornish beach will go on display at the University of Exeter on Friday.

The 2.4-metre grey seal – known to researchers as Septimus – was first sighted swimming near Par by the Cornwall Seal Group Research Trust (CSGRT).

When, just over a year later, Septimus was found dead on a beach near St Austell, experts decided to preserve his bones for display to help people learn more about the species.

The skeleton will be displayed during CSGRT’s Seal Squad Xplorer Programme (SSXP) Roadshow, with the first public showing this Friday (27 July) at the University of Exeter’s annual Marine Ecology and Conservation Network Conference at the Penryn Campus.

“Septimus’s bones reveal he suffered several injuries – any one of which could have killed him,” said CSGRT’s founder Sue Sayer.

“Visitors to the SSXP Roadshow will be able to find out more about his life and death, as well as learning about this fascinating species and the threats they face due to human activities.”

Professor Brendan Godley, of the Centre for Ecology and Conservation, said: “Staff and students at the University of Exeter’s Penryn Campus have been helping to support seal research in Cornwall for over a decade.

“We are proud that the unveiling can be as part of our fourth annual meeting, which is a vibrant gathering of marine conservation community from the region alongside our students and staff.”

Found in April 2015, Septimus was the third-longest dead seal ever recorded in Cornwall, and his body was left on the beach for 100 days to allow a photographic record of decomposition.

After this the body was moved and left outside for two years, before the bones were painstakingly removed, cleaned and sanitised before being left to dry and bleach in the sun. 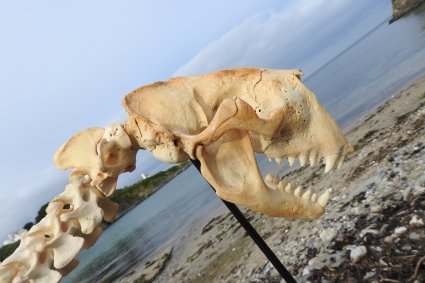 Billy Heaney, a University of Exeter student and film maker, then transported Septimus to London for the skeleton to be reconstructed by professional articulator Derek Frampton.

CSGRT then finally brought Septimus back home to Cornwall.

Friday’s conference at the Penryn Campus is on the theme: "Looking backwards: Looking forwards.” It is free to attend and refreshments and lunch will be provided. Find out more information and book a place via Eventbrite.