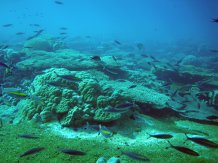 An international team, led by scientists from the University of Exeter, compared the maximum upward growth rates of coral reefs with predicted rates of sea-level rise, and found many reefs will be unable to keep pace.

The growth of coral reefs is strongly influenced by the amount and types of coral living on the reef surface. This growth is now being hampered by combinations of coral disease, deteriorating water quality and fishing pressure, along with severe impacts from “coral bleaching” caused by climate change.

“For many reefs across the Caribbean and Indian Ocean regions, where the study focused, rates of growth are slowing due to coral reef degradation,” said lead author Professor Chris Perry, of the University of Exeter. 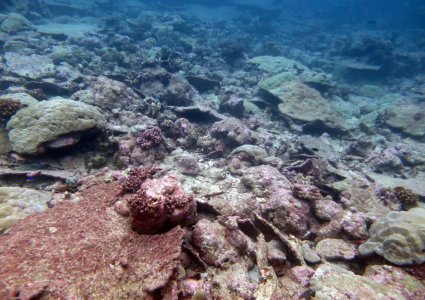 “Meanwhile, rates of sea-level rise are increasing – and our results suggest reefs will be unable to keep up. As a result, water depths above most reefs will increase rapidly through this century.”

“Even under modest climate change prediction scenarios (RCP4.5) only about 3% of Indian Ocean reefs will be able to track local sea-level rise projections without sustained ecological recovery, whilst under continued high emission scenarios (RCP8.5) most reefs will experience water depth increases in excess of half a metre,” added co-author Dr Aimée Slangen of NIOZ, Royal Netherlands Institute for Sea Research.

“This is now of critical concern because reefs play a key role as natural sea defences by limiting coastal wave energy exposure,” commented Professor Nick Graham, of Lancaster University, another co-author of the study.

“Efforts to tackle climate change must therefore be coupled with careful management of fishing and water quality protection to prevent widespread submergence through this century.”

“Now more than ever, we must limit global greenhouse gas emissions. Our predictions, even under the best case scenarios, suggest that by 2100 the inundation of reefs will expose coastal communities to significant threats of shoreline change,” said co-author Professor Peter Mumby of Coral CoE at the University of Queensland. “Healthier coral reefs will reduce the rate of seawater inundation.”

Professor Perry concluded: “The most worrying end-point scenario in this respect is that if predictions of increasing bleaching frequency are realised, many reefs may become locked into permanent low growth rate states, leading to more submergence under all future sea-level rise scenarios.”

The paper, published in the journal Nature, is entitled: “Loss of coral reef growth capacity to track sea-level rise under climate change.”